Wow! You all are totally inspirational. Thanks folks for the wake-up calls, dozens of emails of “where are you Vic?” and other random messages of encouragements of “Why don’t she write?”. My apologies, yet again. Yes… I know I’d faithfully promised to write more often this year. What can I say… it’s been rather traumatic, which leaves very little energy and typically less time to write. But it’s not for a lack of anything to write about. Believe you me, my head is full of ideas, French life experiences, rants & raves, and loads of fuming arguments in the early morning hours when I lie awake in bed with or without Steve peacefully oblivious next to me. If only there was an easy way to capture such churning, creative thoughts!

Somewhere, I read about the 10 best habits of successful writers. No idea how the list defined success, probably based on some commercial statistic like: number of readers, number of books sold, total number of unique visitors, amount of money earned, etc. Regardless, it seemed that writers – successful or not based on this list and other similar lists – all have different habits, including getting up in the middle of the night to write. In fact, these nocturnal scribblings surprisingly appears to be quite a common trait amongst all “creative” types. Frankly, it’s probably true of every type!

Still… it explains much. Since my early teens, I’ve been very jealous of my shut-eye time. Typically, I’m a 9-hour a night kind of gal. But, perhaps it’s time to throw off the duvet and stumble downstairs at 2am or 4am to my computer? Especially now that menopausal symptoms have made sleeping nearly impossible. Indeed, taking advantage of this sleepless state is not a bad idea if it results in several pages of my book and various blog posts written. It sure beats the heck out of insomnia, lying in bed when I’m only pretending to sleep.

Of course, that means by mid-afternoon this lady will need a little siesta. Which is an anachronism in today’s world and not always possible, nor socially popular, nor convenient. Still… I’m giving the idea some serious thought thanks to all you kind folks out there in the Internet world. And, also because I know my good friend Kelly, who is a major somebody at a major company books time on her diary each day for a power nap. By golly, if Kelly can do it, so can I!

Meanwhile, I’ve been busy. So much happening – mostly good, some bad, and a bit, I’m sorry to say, very ugly. On the plus side, first and foremost our next phase of building works have finally kicked off (to be detailed in its own separate blog post), this after a 15-month long torturous renovation loan process which also deserves its own blog post. Soon thereafter, Steve and I enjoyed an unforgettable visit from my in-laws.

Alas, the “out-law” visit didn’t go so well for various reasons. First,the weather was too hot. Apparently, my mother-in-law, Penny, doesn’t tolerate the heat well. Anything above 65 °F / 18°C is a tropical heat wave. Despite our region’s frequent rainy days and unusual lower seasonal temperatures this year, Penny was often very uncomfortably hot and sticky day and night.

To increase my mother-in-law’s misery, she seemed to attract all bugs within a 50-mile radius. She was a magnet for any insect that bit, stung, or sucked blood. Just like a bear to honey, the bugs found my mum-in-law to be very sweet, indeed. Despite providing a mosquito net, sprays, creams and lotions, within a couple of days of their visit Penny was bitten from head to toe, quite literally, and swollen up like a balloon. Whereas, the rest of us appeared to be immune and completely bug-free. Penny simply was too strong an attraction and lured all the festering buggies to her instead. We must really give our heartfelt thanks for her sacrifice.

If that wasn’t enough to ruin the in-laws’ holiday, my father-in-law, Stuart, nobly endured one of the worse attacks of hay-fever ever suffered. This was caused by an exploding French legion of pollen here in SW France. Over the past 9 years, I’ve never seen my father-in-law, who is usually care-free and light-hearted, in such discomfort. Poor Stuart’s eyes were as red as the roses blooming outside. 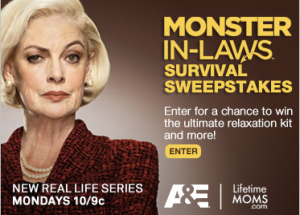 Then as an extra special family visit bonus, we enjoyed the typical mother and daughter-in-law bad mojo dynamics. That proved to be really, really ugly on all sides. Needless to say, I won’t be elaborating, despite having written much of the dramatic trauma down in a fit of emotional anguish one late evening. Or was it early morning? Regardless, just consider it something to look forward to reading (or not) in the upcoming 30-40 years. Meanwhile, I’m seriously considering entering Penny and I into the Monster-in-Law Sweepstakes contest. Wish us luck!

And, this my friends is where I leave you. Just for now. Not to worry. There’s much to write about as mentioned above about our new onslaught of renovation works, building teams, French banks, insurance and life in general here dans paradis de campagne français. Merci bien again for your perseverance and patience!

12 thoughts on “Going Back to the Future Past”