The Midi-Pyrénées, which includes the Hautes-Pyrénées, is possibly the world’s capital of festivals holding the 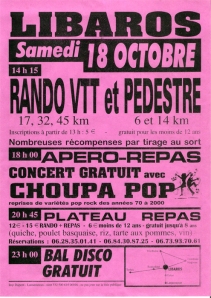 largest number of a wide variety of festivals, village fetes and other special events in France.  The list of events in the Midi-Pyrénées is so long (there are well over a hundred), it’s not possible to list them all, but here’s a select few:

Of course, Libaros has it’s own village fete each year, but also holds concerts throughout the year. Got to hand it to the French, when they decide to celebrate, they party with true grit along with their kids, dogs and even sighted a few sheep and ducks in attendance (and not on the dinner table).

Le Tour de France whizzes through the region in mid-July, with three grueling mountain race stages wounding around the Pyrénées. In fact, this year celebrates 100 years of the world’s most famous cycle race in the Pyrénées.

Jazz Festival in Marciac has become legendary. Starting in the first two weeks of August,

a series of concerts perform in various marquees plus musical sessions throughout the year. The line-up of musicians includes many of the modern-day greats like Keith Jarret, Dee Dee Bridgewater, Diana Reeves, Wynton Marsalis, Diana Krall and McCoy Tyner to up-and-comers like Esperanza Spalding and Kyle Eastwood. Tickets sell out quickly for the well known artists. But don’t worry on missing out. There are several free concerts held in Marciac’s main square.

Other jazz festivals are held in Souillac en Jazz and Jazz in Montauban. Montauban swings to the rhythm of la chanson française during the popular festival Alors …chante! where rising talent and top artists share the stage.

Sorry we missed this one. All the American big bikes, big burgers and, of course, country music would have been great fun. Alongside an international music programme are a meeting of motorbike enthusiasts, hot-air balloons, huge American cars and more than 200 stalls. Our neighbour, Peter, always goes dressed as an Yankee Civil War general. It’s a must-go next year!

For something which has something of everything, go to Rio Loco (literally means crazy river) fires up the banks of the Garonne river in Toulouse during 10 days of celebrations. Each year a different country is invited to participate. This year was South Africa, next year is Mexico.

On the classical front, there is loads of choice. Leading the field is the international festival, Toulouse les Orgues, a daring programme performed in September thru October on alternate evenings in Toulouse and in the region.  The Festival du Comminges and the Festival de Saint-Lizier, both held in July, celebrate classical music with a a repertoire in the cathedrals of Saint-Bertrand-de-Comminges and Saint-Lizier. Back in Toulouse, Piano aux Jacobins is the first French festival entirely dedicated just to the piano.

For grand pageantry, theatre and sheer drama, there are evenings of brilliant costumes, characters and lights. The show Au fil de l’eau, une Histoire in Valence d’Agen, brings together over 450 actors and

superb scenery all lit up by a brilliant firework display. The natural amphitheatre in Flagnac is the setting for 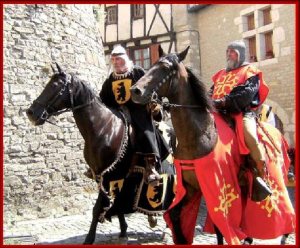 Hier, un village, a tableau where actors and special effects recall the joys and sorrows of this village in the Rouergue at the beginning of the 19th century. The Fêtes du Grand Fauconnier in the hilltop medeival village of Cordes-sur-Ciel involving a grand parade, street events and performances which capture the spirit of the bastide founded in 1222.

Les Explorateurs du Temps (Foix) is another event inspired by the Middle Ages, in which the rich past of the Ariège, from prehistory through the rule of the Counts of Foix to Revolution, is played out at the foot of Gaston Febus’s castle. 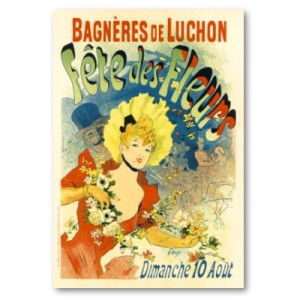 In May, Vic-Fezensac holds its Pentecost (Whitsun) Feria with the running of the bulls and bullfighting. The village follows this event with the Tempo Latino Festival in June, where the streets fill with music and dancing throughout 4 days.  An explosion of colour, music and merriment hits the Pyrenean town of Bagnères-de-Luchon every August. The flower festival includes dancing, classic cars and a beauty contest as well as the central floral parade.