Summer is drawing to a close, with the nights growing cool. But, there’s exciting times here at The Folly. Newsflash: Phase 3 commenced officially May 2012. Whoo hoo! Who would have thought it would take nearly 3 years to get to this point.

Cheerleading aside, the reality is that the ramp up to hiring new builders on-site chez The Folly took months of research, wrangling, blood, sweat and not a few tears. The reasons why we needed new builders is yet another long story. Which will be discussed with infinite more detail in a separate article, “How to Find and Select Builders/Artisans for your French Renovation”.

Works have commenced since May. The builders have less than 2 months to finish the work for Phase 3. Fingers’ crossed! 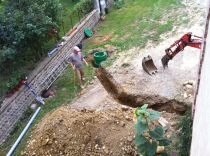 Landscaping and carving out a new driveway and carpark, along with making the courtyards level along with walking paths in the gardens and around the grounds comprise about 40% of the works. This includes a pool, a couple of fountains and landscaping large parts of the property. But

before any of that work could commence, Russell, the commissioned artisan, was charged with repairing the current septic systems (those already installed and those planned for the future) so that the systems work. Due to several factors, holidays and illness, this took the artisan several months to resolve and get the French authority’s approval.

A significant chunk of Phase 3 has been converting and renovating the Chai (the old wine-making room on the ground floor within the west corner of the main house) and the rooms above into what all will become the Caretaker’s Suite. This includes the Grande Cuisine (large kitchen), a spacious bedroom with a walk-in closet and bathroom in the rooms above the large and small kitchens. Yes, you read that correctly. There will be two kitchens in the house. Explanations to follow.

Structurally, some of this renovation work started in phase 1 and 2. This mostly focused on plumbing and carpentry. But now these aspects must to be redone due to Team 1’s cowboy efforts.

Phase 1 also included making new doorways that required cutting through 2 feet of stone walls on the ground and 1st floors, including closing off one existing doorway. (Ditto reference above to Team 1’s cowboy efforts).

When preparing the caretaker’s bathroom, our plumber George discovered more problems. The shoddy work would explain the unexplained leaks and smells coming from the “white” bathroom. This is the 6th time we’ve had to have previous”work” repaired and in some cases completely totally replaced.

On the plus side, aspects of this work has been salvaged and Team 3 has been able to carry on with renovations. Thank you et merci bien!

Laying the concrete floor on the ground level.

Originally, the former utility room on the ground floor had a door which led into the Chai, which had a rickety old staircase leading up to a bedroom and/or store-room. From the looks of the place, the upstairs room was multi-purpose. I can only hope that it was a hardy stable lad who was forced to sleep in that room, and not one of the former owner’s daughters. To say it wasn’t terribly inviting is an under-statement of gigantic English proportions. A total review of the Caretaker’s bathroom and bedroom follows in the next blog posting.